How Does Teacher Retirement Work in Washington ?

In Washington, teachers are a part of the Teachers' Retirement System. New teachesr have 90 days to choose among two available retirement plans: Tier 2, which is a defined benefit (DB) pension plan, and Tier 3, which is a hybrid plan that combines elements of a pension plan and a defined contribution (DC) plan. The Tier I plan is a legacy pension fund that is closed to new teachers.

Washington's Tier 2 plan pension plan, as well as the defined contribution component of the Tier 3 hybrid plan are structured similarly to the pension plans of other states. Unlike other retirement funds, in a defined benefit plan a teacher’s contributions and those made on their behalf by the state or school district do not determine the value of the pension at retirement. Although those contributions are invested in the market, and often managed by private equity and hedge funds, the pension wealth component of the overall hybrid plan is not derived from the returns on those investments. Instead, it is determined by a formula based on their years of experience and final salary.

How Is Washington's Tier 2 Pension Calculated?

Pension wealth is derived from a formula. The figure below illustrates how a teacher pension is calculated in Washington's Tier 2 pension plan. It is imporatnt to note, however, that the state assesses an educator's final salary based on their average salary based on the average of their highest 5 consecutive years of salary. For example, a teacher who works for 25 years with a final average salary of $70,000 would be eligible for an annual pension benefit worth 50 percent of their final salary.

Who Qualifies for a Tier 2 Teacher Pension in Washington?

Like most states, teachers need to serve a number of years before qualifying for a pension. Washington's Tier 2 pension plan has a 5 year vesting period. While educators qualify for a pension after 5 years of service, the pension may not be worth all that much. Moreover, educators can’t begin to collect it until they hit the state’s retirement age. The state sets specific windows when teachers can retire with benefits based on age and years of experience. Teachers in Washington's Tier 2 plan can retire with full benefits at age 65 with at least 5 years of experience.

Additionally, Washington allows early retirement. Tier 2 teachers  can retire early at age 55 with at least 20 years of service. However, teachers taking that option have their benefits reduced based on their years of experience and how early they are retiring.

How Much Does Washington's Pension System Cost?

Finally, Washington's Tier 2 plan, as with most state pension plans, a teacher's pension is not portable. This means that if a teacher leaves Washington's TRS system, they can’t take their benefits with them, even if they continue working in the teaching profession. As a result, someone who leaves teaching or who moves across state lines might have two pensions, but the sum of those two pensions is likely to be worth less than if they remained in one system for their entire career. In other words, the lack of benefit portability will hurt the long-term retirement savings of any educator who leaves teaching altogether or who crosses state lines to work in another state.

As with most state pension funds, Washington's Tier 2 teacher retirement system provides the greatest benefits to teachers who stay the longest, while leaving everyone else with inadequate benefits. With that in mind, new and current teachers in Washington should think carefully about their career plans and how they interact with the state's retirement plan.

How Are Washington's Tier 3 Benefits Calculated?

Washington's Tier 3 retirement plan combines elements of both a DB pension plan and a DC plan. Teachers contributes a set percent annually to the DC portion of the plan. The figure below from the Washington Department of Revenue Services outlines teacher contribution rate options. If a teacher does not select an option, they default into Option A. 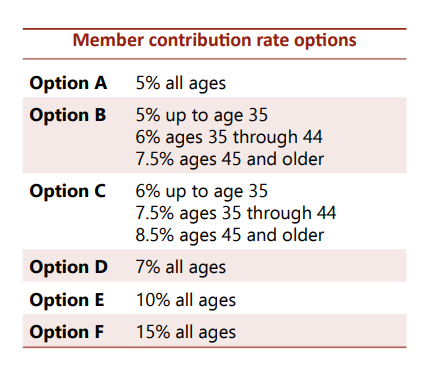 A teacher's employer contributes solely to the pension plan. Employer contributions to the DB plan are established by the Pension Funding Council and are periodically adjusted. The figure below illustrates how the teacher pension portion of Washington's hybrid Tier 3 plan is calculated in. It is important to note, however, that the state assesses an educator’s final salary based on their highest 5 consecutive years of salary. But keep in mind the DB plan is only a portion of a teacher's retirement benefit under the hybrid Tier 3 plan.

Who Qualifies for a Benefit in Washington's Hybrid Plan?

Like most states, teachers need to serve a number of years before qualifying for a retirement benefit. For new hires participating in the Tier 3 hybrid fund, Washington has a 10 year vesting period, or a 5 year period for teachers who earned at least 1 of those qualifying years after age 44. While educators typically qualify for the pension portion after 10 years of service, the pension may not be worth all that much. Moreover, educators can’t begin to collect it until they hit the state’s retirement age.

The state sets specific windows when teachers can retire with benefits based on age and years of experience. For new teachers starting out in Washington, they can retire with their full benefits at age 65 with at least 10 years of service.

Additionally, Washington allows early retirement for Tier 3 teachers at age 55 with at least 10 years of service. However, teachers taking that option will have their benefits reduced.

November 19, 2015
Contributions made into teacher plans are related but not directly tied to what teachers actually receive in benefits. That matters a lot.
Read more

August 19, 2015
There are teaching jobs in every state, but compared to other professionals, teachers are unlikely to move across state lines.
Read more
Last updated: April 24, 2020